An anomaly in popular rock, Biffy Clyro exude experimentation while being infinitely appealing to a wide range of audiences. ‘A Celebration of Endings’ stands as their ninth studio outing, and if the reception is anything to judge by, they still command that balance excellently. After debuting as an alternative act, Biffy became an oftentimes strange art-rock project characterised by abnormal time signatures and quirky song titles like ‘There’s no such thing as a jaggy snake’. Insatiably successful, ‘Puzzle’, ‘Only Revolutions’ and ‘Opposites’ introduced huge cinematic textures that helped elevate them to an insurmountable status, both in terms of songwriting and live performance. 2016’s ‘Ellipses’ featured plenty of worthy moments yet felt less cohesive as an experience. That said, last year’s soundtrack ‘Balance, Not Symmetry’ was definitely greater than anyone expected. At this point, the Scottish rockers have earned enough respect to get away with anything, while honing their craft in unique, interesting ways.

Immediately, we get a sense of the capriciousness of the piece, with ‘North of No South’. Beginning on sharp guitar improvisations, the opener bears the feel of one of their performances where there’s lots of tension and unexpectedness utilised to create a sensation of exhilaration. We spill over into a gargantuan riff and abrasive rhythmic elements, once more creating that titanic sound which never fails to astound, considering there’s only three instruments at play. ‘The Champ’ demonstrates that familiar theatrical side yet embellishes the orchestrals in a way which brilliantly complements the feeling of rising up, in keeping with the inspiring theme of embracing progressions in thinking, always listening to those whose futures are at stake. Reminding us of a knack for writing songs that shouldn’t work on paper, yet shine in practice ‘Weird Leisure’, encompasses multiple changes in rhythm, exchanging intense, soaring and blissful, in a way which proves incredibly engaging. Even the amiable, radio-staple of ‘Tiny Indoor Fireworks’ makes perfect sense in the lively, animated setting of the album. Certainly, these anthems will transmit brilliantly live.

‘Worst Type of Best Possible’ and ‘Space’ are both contemplative and gigantic in equal degree. The former's a smouldering, cathartic anthem about desperately trying to keep your head above water in a time of crises and ‘holding out for a change’, in spite of an environment which seems increasingly hopeless. The later proves a beautiful power ballad, not quite on the level of their biggest hit, yet still stunning in the way the way the reassuring strings coil around the sombre pianos and strained vocals. ‘This is not a love song, that was just a phase’ rings the first line of ‘End of’, completely contrasting the last track, as Simon and co. convey a feeling of pure rage. A sentiment which they’ve rarely commanded so convincingly, the anger they feel at being abandoned by a band partner who chose money over friendship, wells so deep inside the anthem that the listener can feel the spurns of fury burning them from the inside out.

In fact, ‘Instant History’ despite the controversy the cut has garnered for sounding nothing like anything else they’ve ever written, acts as an excellent quantifying moment. What I mean is that through the dazzling synths, the chanted chorus and the steady yet brooding development, we retain all the emotion of the previous epics, while introducing a new idea to guide us towards the changeable nature of the last three. ‘The Pink Limit’ definitely grows on you with the sudden alterations between the jazzy, insatiable development of the verses, against the bombastic flair of the chorus. By contrast ‘Opaque’ is a soothing, introspective moment which takes the inherently political album themes of accepting change, and reduces them to a personal level, ending on the achingly gorgeous refrain of ‘these walls are closing in’. Lastly, ‘Cop Syrup’ contrasts pure, unfiltered aggression with intriguing, post-punk development. From there we transition to a mesmerising acoustic interlude, and finally towards an impassioned string-laden crescendo. ­

Overall, ‘A Celebration of Endings’ acts as a delightful synthesis of everything they have achieved, featuring a wide array of sounds and concepts, celebrating the end of one era of Biffy Clyro and championing the beginning of another!

‘A Celebration of Endings’ is out now via Warner Records- stream the record here: 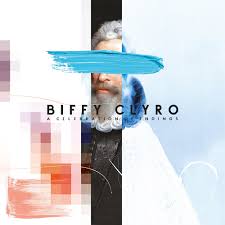 Check out the music video for ‘Instant History’ below:

LOUDER REVIEWS: 'Heaven Is A Place, This Is A Place' - Frank Iero and the Future Violents

LOUDER FEATURES: Albums to Get You Into Modern Prog

LOUDER FEATURES: Our Albums of 2020